“Why do they hate us?” This is the longstanding question revisited by Jonathan Aylward of The Michigan Daily in his recent column. “They” refers generally to the Middle East, and “hate” to the dismal view of America held by the people there. The author argues that the recent uprisings there show that much of the world disdains America because we don’t support freedom enough: 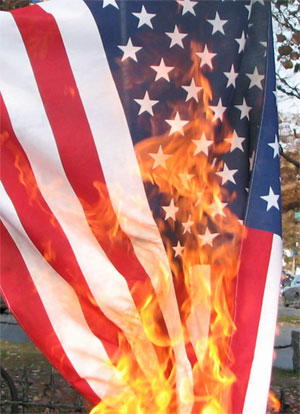 Despite Obama’s lofty assertion, it’s clear that we still actively support regimes that repress democracy and human rights in the Middle East. This simple fact goes a long way in explaining the question we’ve been asking since 9/11: “Why do they hate us?” Anti-American sentiment will continue to grow as the gap widens between what we say we represent and what we actually represent.

It’s certainly true that there are plenty of examples of inconsistent and even hypocritical American policies towards corrupt or abusive governments. Examples include the support of oppressive regimes like those in Egypt, Saudi Arabia, and Yemen, even while U.S. officials routinely criticize their routine violations of basic rights. The “realist” school of foreign policy has long argued such policies to be a necessary evil, required to maintain social, economic, and military “stability”—sometimes, if necessary, through tolerance or support of enemies of political freedom. Propping up Mubarak in Egypt or turning a blind eye toward the oppression of the Chinese has been seen as important to serving the supposedly greater aim of a more stable world, if not a freer one.

To the extent America is guilty of such hypocrisy, it deserves criticism. But it is misleading to name this as the main complaint motivating Middle Eastern and other protests, as if all would be forgiven if we were consistent in word and deed. It would not. The anti-Americanism around the world hasn’t come from a few broken promises or hypocritical relationships. There is a deeper grudge much of the world holds against America which would exist regardless of perceived hypocrisy.

Consider some context. During the same time period the author mentions, the U.S. was at first opposed by most of the world in its plan to bring down the Iraqi dictatorship, with critics stressing the importance of “self-determination.” Later, critics actively encouraged the U.S. to seek “multilateral” relationships with other nations in order to bolster support for the war effort. Why? Because the American sin popular to point out at the time was its willingness to act on its own without appropriate deference to world opinion. Yet the world now criticizes the U.S. for being overly tolerant of too many unsavory governments. Or consider the case of Abu Ghraib: America received worldwide condemnation for the comparatively mild treatment of some detainees by U.S. soldiers, while the dozens of regimes practice brutal torture on a daily basis received little mention.

Moreover, polling data reveals that anti-American views often coexist with deeply disturbing beliefs. For example, a 2010 poll of Arab public opinion shows only 12% hold a positive attitude toward America. Meanwhile, only 3% admit to empathy for Jews slaughtered by the Nazis, with 29% having “mixed feelings”, and 59% openly resenting sympathy toward the Jews. Or consider the Arab world’s take on the notoriously brutal Iranian regime and its pursuit of nuclear weapons (with a majority accepting this as the actual purpose of Iran’s nuclear program). Overall, 57% of Arabs favor a nuclear-armed Iran. One striking example is Egypt, recently celebrated for casting off an oppressive dictator. Egyptians polled support arming the even more oppressive and belligerent Iranian theocracy with nukes, by a margin of 4 to 1. And Arab concerns about the U.S. track record of supporting human rights? It barely registered relative to anger about the existence of the region’s most rights-respecting government (Israel).

It’s not easy from such examples to point to what exactly motivates the bulk of anti-American sentiment. But one thing is definitely clear: most of America’s critics in the Middle East and beyond are not devoted defenders of individual rights and freedom. Accordingly, we ought to question the degree to which such criticisms are motivated by a genuine desire to advocate for justice, rather than a desire to see America tarnished. For many around the world, no particular policy or act could redeem the U.S. as a country worthy of admiration.

America stands as a symbol of individualism and independence; it is a place where the pursuit of wealth and individual happiness is celebrated rather than condemned. This is a stark contrast to most of the world’s cultures, particularly those of the Middle East, where collectivism and pious obedience dominate. This contrast is nowhere more evident than in the region’s attitude toward Israel, an unlikely neighbor whose cultural emphasis on individual freedom garners nothing but hostility in return. So although the argument that “they hate our freedom” may be a simplistic cliché, it contains an important element of truth.

This isn’t to say that anti-Americanism is a simple phenomenon or can be easily defined; some may arise from misperception or misinformation, while other cases are clearly born out of irrational hostility. But for those genuinely concerned about defending and maintaining the integrity of America’s ideals, it is important to identify and condemn anti-American sentiment, even when couched in legitimate complaints. For many critics, “what we actually represent” is itself exactly the problem, not instances where we stray from it. Yes, we ought to do better—but better for the right reasons.
—-
For more commentary on this issue, watch Dr. Yaron Brook’s speech on the topic.