The #Resist movement is gaining steam on a simple narrative: Donald Trump’s election represents the triumph of bigotry. The man serves as an avatar for America’s worst tendencies: racism, sexism, homophobia, xenophobia. He blows dog whistles to the barbarism of the alt-right. It must be stopped.

While the threat posed by the alt-right is almost certainly exaggerated, there’s at least some basis for the #Resist movement’s narrative. After all, the alt-right does actually exist. It does have popular thought-leaders and flamboyant gadflies spreading the faith. And many in that movement really do think they have the most powerful man on earth winking (at least at times) in their direction. 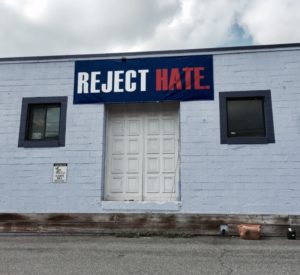 But there’s something missing from the #Resist movement’s diagnosis, presented in the slogan “Reject Hate.” Presumably, followers parrot that slogan because they believe Trump and the alt-righters say and do things that are wrong, and wrong in a way that’s worth condemning. And presumably, whenever #Resisters encounter that sort of behavior—like Trump’s defending public monuments to confederate generals or the alt-right’s holding neo-Nazi rallies—certain emotions come to the fore: disdain, revulsion, and even hate.

That’s not a bad thing. Emotions are our natural responses to the world around us based on the convictions we hold. Just as we experience love when we think of our dearest romantic partner, so we experience hatred when we think of the tragedy in Charlottesville. We experience the love because that person—their virtues and values—mean the world to us. We experience the hatred because that tragedy—and the ideas that motivated it—threaten our world. It’s good to feel those things because the convictions that make such emotions possible are correct.

The upshot is that because emotions depend on convictions, hatred can be appropriate, depending on its object. What really matters in evaluating a given movement, then, isn’t the fact that it says and does hateful things, but the source of that hatred—the ideas at its root.

For the admittedly odious alt-right, those ideas are clear: they believe the genetic tribe is the primary social unit, and that white Europeans are the superior genetic tribe. To the extent the alt-right spouts racist-sexist-homophobic-xenophobic nonsense—and it often does—what’s important isn’t that the nonsense is “hateful,” but that it’s worth hating.

To the extent the alt-right spouts racist-sexist-homophobic-xenophobic nonsense—and it often does—what’s important isn’t that the nonsense is “hateful,” but that it’s worth hating.

It’s worth hating because it’s wrong, and viciously so. Judging whole populations based chiefly on irrelevant and superficial characteristics like race, gender, sexual orientation, or nationality, is unjust. It undercuts our capacity to treat the actual people in our own lives as they deserve to be treated (one way or the other). It elevates our unchosen traits over the choices we make and the characters we craft for ourselves. And authoritarians for centuries have used it to justify trampling individual rights by scapegoating certain supposedly inferior or problematic groups (e.g. slaves in the Antebellum South or Jews during the Holocaust).

“Reject Hate,” therefore, misses the mark. What makes the alt-right brand of hatred possible, what makes the movement tick, is an idea: collectivism—the belief that an individual’s membership in a group defines that individual. The alt-right’s collectivist ideal is the foundation that must be attacked if the movement is to be stopped. That is the premise that must be resisted.

But one wonders whether the so-called #Resist movement is up to the task. After all, the movement is led by many on the social-justice left whose worldview depends on the same collectivist premise: “ALL white people are racist”; “ALL men are sexist.” Such claims are a dime a dozen—which, incidentally, has only fueled the rise of the president and the ideology they claim to oppose. Is #Resist really the sort of movement capable of mounting a serious, intellectual challenge to either?

If their proposed solution is any indication, then certainly not. The “Reject Hate” imperative confuses more than it clarifies. And its sister slogan, “Love Trumps Hate,” is just the other side of that same emotion-focused coin. Just as hatred isn’t always wrong, so love isn’t always appropriate. Certain people deserve our love. Others, like David Duke and Richard Spencer, do not.

But it takes genuine judgment—the willingness to evaluate others as individuals—to figure that out. Collectivism is incompatible with such judgment. And if the #Resisters truly want their campaign to count for something, that is the lesson they’ll need to learn first. Otherwise, what are they really resisting anyways?