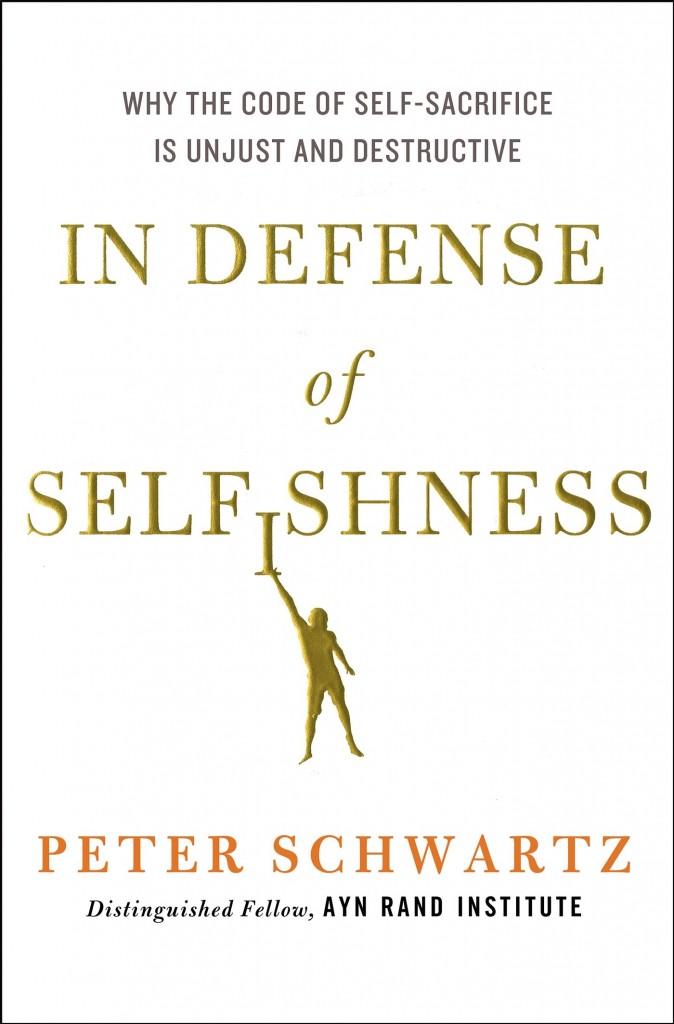 Peter Schwartz is a distinguished fellow and former chairman of the board of directors at the Ayn Rand Institute, and author of Libertarianism: The Perversion of Liberty and The Foreign Policy of Self-Interest: A Moral Ideal for America. Recently, The Undercurrent’s Eric Rosenberg had the opportunity to interview Schwartz about his newest book, In Defense of Selfishness: Why the Code of Self-Sacrifice Is Unjust and Destructive.

The Undercurrent: Why did you decide to write your latest book, In Defense of Selfishness?

Peter Schwartz: I wanted to write a book that would explain to people the morality of altruism and selfishness, since there are so many misconceptions about both, particularly, about selfishness. I wanted to try to show people how they have basic concepts wrong and offer them a rational alternative, which I hope will start to influence people and change their views on these basic issues.

TU: What is selfishness?

Schwartz: Rational selfishness means establishing rational goals and rational values, and then determining how you can achieve your goals and values. It means not giving them up because someone tells you have no right to exist for your own sake, but you rather must sacrifice your possessions and your goals and your happiness for the sake of other people.

TU: What misconceptions do people have about selfishness?

TU: Why do people have these misconceptions about selfishness?

Schwartz: Everyone is taught that selfishness is bad from a very early age onward. Altruism has a long tradition in philosophical thinking that has virtually no dissent other than Ayn Rand and, going way back to Greek culture, Aristotle. Since the time Christianity took hold in the West, no philosophers have stepped up to challenge these ideas or to advocate for rational self-interest until Ayn Rand came around.

Virtually every major thinker, every philosopher, who addresses selfishness regards the idea as epitomized by an emotionless creature. They tell us that selfishness is doing whatever you happen to desire, rational or not. They think that selfishness is the equivalent of an animal mentality where you just focus on the immediate moment rather than acting on your long-term interests, and this follows from their view of the nature of man as not being rational.

TU: How is your book different from Ayn Rand’s book about selfishness, The Virtue of Selfishness?

Schwartz: My book is different book from Rand’s in terms of its approach. I take Rand’s code of morality that says man’s life is his standard of value and use it as the foundation for the cultural analysis in my book. My book is about the manifestations and consequences of altruism in our culture as against the alternative of rational self-interest. I show readers that altruism is not what many people think of as simply benevolence towards others, but rather a demand that you subordinate yourself to others and live to serve them.

TU: Why is it important to reclaim the definition of selfishness?

Schwartz: It’s important because the function of a concept is to identify and classify some facts of reality. In reality, there is a phenomenon of people acting for their own self-interests without victimizing others, and that’s what we need a concept to name. Without a proper concept of selfishness, the producer is lumped together with the amoral parasite, with no distinction between the two. We need to rescue the concept of selfishness to show that there is a distinction between the two. The concept of selfishness simply means acting for your self-interest, and that does not require you to victimize others.

TU: Do you think young people are most hurt by the altruist concept of selfishness?

Schwartz: I think altruism hurts everybody. The only reason to single out young people is that they are at the stage of life were they are forming their basic ideas about life. They are trying to determine what’s right and what’s wrong, and they are only offered a straw man view of selfishness. It’s a tragedy because people could, if they were given an alternative view of selfishness, come to the conclusion that rational selfishness is good. Instead, the idea that selfishness is good doesn’t exist for them. In colleges and universities, students are only taught the ethics of altruism, so students simply accept it to varying degrees, and that shapes the rest of their lives. So you could single out young people as particular victims of altruism’s approach to morality, but it affects everybody. All who live by the idea that they are not entitled to live for their own sake, to the extent that they accept it and believe it and act on it, are undercutting their own lives and their own happiness.

TU: Is selfishness an all-or-nothing proposition? Are you either selfish or not selfish? Is there no in between?

Schwartz: In principle, no. Either your life is yours or it belongs to others, just like every dollar in your pocket. Is that money yours or does it belong to somebody else? There is no in between. It’s not like half of it belongs to me and half of it belongs to someone else. That’s still conceding the principle that it’s not yours, if half of it belongs to someone else. Why is one half different from the other half? In terms of its principle and its application to any single decision you make, it’s A or non-A, it’s one or the other, it’s selfishness or non-selfishness. However, most people live a mixture of the two. Most people are inconsistent, sometimes they act to achieve their self-interest and sometimes they act in the accord of self-sacrifice. But in terms of the principle, it’s black and white.

TU: In your book, you talk about how making community service a graduation requirement for students can be detrimental to their lives. What are the negative consequences of requiring students to give back?

Schwartz: Many high schools will not issue students a diploma unless the student has spent a significant amount of time doing so-called community service, and I think that is terribly unjust. It penalizes the ambitious, career-oriented student trying to prepare for his future. An ambitious student will be devoting himself to getting into a top college, getting a good education, preparing for a career, and instead of doing that, he has to take time away to go find something that will satisfy the requirements of his community service, and anything will satisfy the requirements as long as it harms him and benefits others. I think that’s very unjust and destructive in practice because it takes valuable time away from him. Intellectually, it’s even more destructive because it instills in the student that the moral way to live is by sacrificing himself, by sacrificing his goals, his future, his own happiness, for the sake of others, and that is a terribly crippling idea to instill in a young person.

TU: Is it selfless for young adults to do what their parents and teachers tell them to do in regards to their career choices and life goals?

Schwartz: How much a person should listen to their parents and teachers depends on a person’s age. If a high school student knows what he wants to do and has good reasons for wanting to do it, then decides not to because his parents want him to be a lawyer, he would be acting selflessly. He would be subordinating his goals and values to his parents.

TU: What advice would you give college students for leading selfish lives?

TU: Are you selfish?

Schwartz: I think I am selfish. I am living my life on the premise that my life is my own highest value, and I am unwilling to sacrifice it. And I don’t want others to sacrifice for me. All my relationships are in pursuit of my self-interest and benefit the people involved as much as they benefit me. All of my relationships involve trading values for values.