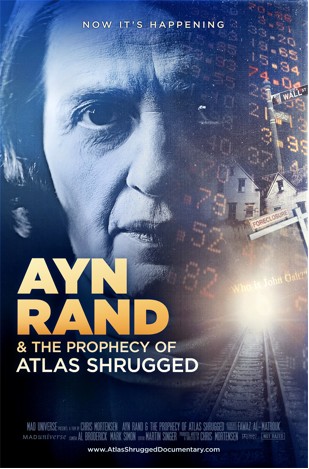 Ayn Rand’s Atlas Shrugged is a mystery novel depicting “the day after tomorrow,” in which the great minds of society decide to withdraw their efforts from the world.  The title is a reference to the Greek myth of Atlas, who carries the weight of the heavens on his shoulders. The novel centers on Dagny Taggart, the head of a major railroad company who struggles to produce even as her company is being crippled by collectivist government regulations. The novel portrays the industrialists, scientists, producers, artists, and philosophers who have gone missing, resulting in disastrous effects on the world at large.

Ayn Rand claimed to write the novel with the hope that it would change what she saw as America’s swift march towards dystopia. Now, it’s been over 50 years since the eerily prophetic Atlas Shrugged was first published, and it’s more popular now than ever, selling hundreds of thousands of copies every year. Through a series of interviews with prominent entrepreneurs and experts on Rand’s philosophy, Objectivism, the new documentary Ayn Rand and the Prophecy of Atlas Shrugged attempts to explain why the novel is so popular, and just how its predictions have come true.

As Rand wrote in Capitalism: The Unknown Ideal, “if you understand the dominant philosophy of a society, you can predict its course.” As far as her novel has succeeded in predicting the future, it has done so because it observes the nature of the destructive philosophical principles at work in America, where egoism and capitalism are vilified and government acts in the name of “being your brother’s keeper.” It was the transition from the Founding Father’s principles of individual freedom to the worship of the collective good that pushed America towards burdening the innovators and businessmen with regulations that inhibited their ability to produce. The only result can be to shackle the great minds, who then gain the incentive to go on strike in protest. Recent commentators have called this form of strike “going Galt,” after the name of the hero of Atlas.

While the characters in the novel were purely fictional, several of today’s innovators, from internet ventures to hedge fund managers, have decided to “go Galt.” The web retailer Amazon withdrew their affiliate services from California after a new sales tax was passed that put their profits on the line. In search of a Galtian freedom, PayPal founder and early Facebook investor Peter Thiel has even donated $1.25 million to an initiative to create floating platforms in international waters beyond the reach of government interference. Many doctors have said they will retire rather than assume the additional regulatory burden of the latest federal health care law.

The documentary spends the majority of its runtime informing the viewer about Rand, her career, Atlas, and her philosophy. Only in the final act does the film narrow its focus on the predictions and their relation to current events. This is the shortcoming of the piece. Although it is great for a film to capsulize Atlas Shrugged’s complex narrative and interview people who have derived personal inspiration from the novel, the film would have been more fulfilling if it had gone further in exploring precisely how relevant are the book’s predictions to the headlines of today. The film should have embodied that research given the premise of its title.

For any lover of Atlas or of Rand’s ideas, listening to the stories of people closest to her and the individuals she influenced brings into focus her memorable life and her work on her prophetic novel, one of the most relevant novels of our times. Check out the film in select theatres January 17th and 26th.

Help Distribute the New TU Flyer on the Occupy Movement