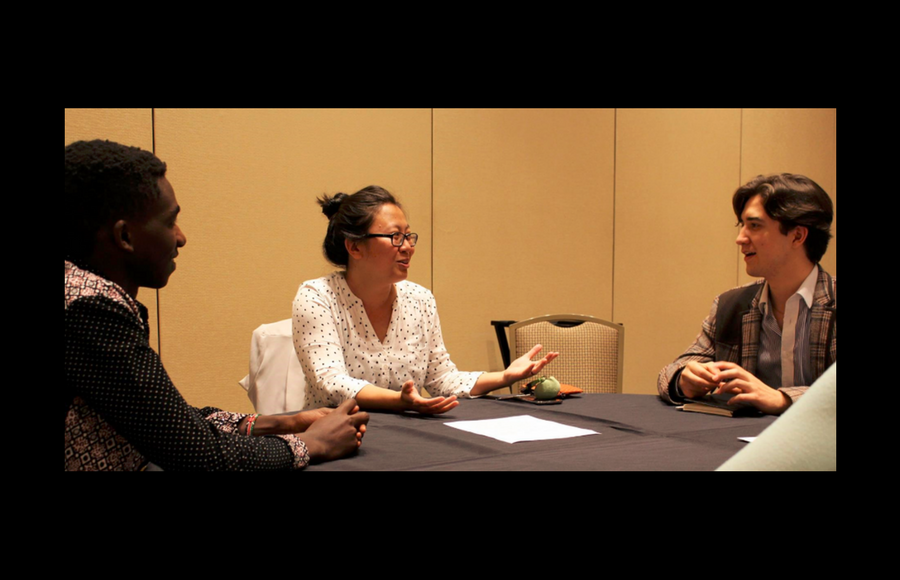 Letters to the Editor, Spring 2016

Last semester, enterprising students from across the country and beyond gathered in Atlanta, Georgia, for the Leven Foundation Student Conference on “The Morality of Value-Creation and Trade,” co-hosted by STRIVE and the Ayn Rand Institute. Students enjoyed a series of lectures and breakout sessions by entrepreneurs, professionals, and intellectuals on the philosophical and business principles necessary to create and trade value. To stimulate reflection on the weekend’s experiences, ARI offered attendees a $1,000 prize for the most thoughtful short essay on the personal value of the conference to them. What follows is this year’s winning essay, from Ryerson University’s Sareema Husain. Congratulations Sareema!

I’m wary. As I make my way downstairs in the elevator and glance at the posh individuals gleaming in their suits, I think to myself, “What am I even doing here?” I consider myself far from what one would consider a “business kid.” I love English, fine art and philosophy. I hang out with dropouts that cling to their artistic passions like a lifeline. It was initially Ayn Rand’s entrancing philosophy that brought me to this conference. The gripping, unique characters in her novel The Fountainhead reeled me in, and I’m hoping to be surrounded by a bunch of Howard Roarks and Dominques this weekend, individuals who don’t have time to care about hierarchal pyramids because they’re too busy focused on creating. But that’s just hopeful thinking—books seldom mimic reality, and I prepare myself for pretentious small talk cluttered with jargon.

But I’m pleasantly surprised. Only ten minutes into the introductory dinner and I am chatting up the people sitting beside me, learning more about who they are rather than just their career profiles as I had expected.

The two main topics I was constantly challenged on throughout the conference were capitalism and altruism. In today’s culture, the word “capitalism” carries negative connotations because it implies class divisions. However, it also encompasses opportunity, growth and entrepreneurship. Growing up, I’d hear stories about grandparents that arrived in Canada with nothing but a dime in their pocket and, through hard work, became millionaires. If this was the case, why did everyone in my grade 12 politics class hate capitalism? What other political and economic system did they have in mind that would reap more benefits and fewer casualties? Listening to the lectures opened my eyes to the obvious benefits of popular systems that get shoved under the rug because their glaring defects are difficult to eradicate.

The concept of having a “noble duty” and “giving back to the world” is one that has been entrenched in me since childhood. Being involved in activism and volunteerism, I constantly debated in my head whether I was doing it because I actually cared about the cause, or because it made me feel good about myself. This conundrum would always invite an existential crisis or two. A key message I took from the conference that settled this long-time debate was this quote: “Make the world a better place . . . by doing something for yourself.” It made me realize that innovation comes from thinking for yourself, and that the virtue of independence is not something that should be tossed into the trunk for the sake of a false noble duty. Noble duties won’t inspire you at 3 a.m. when you’re on your third coffee and your eyelids are heavy.

Even as an artist, the value of this conference was immense. I’m thankful there was a panel called “Value Creation in the Arts.” I was able to ask questions and obtain knowledge about getting over creative blocks, why failure is the only option and how opportunity lies in the good ideas that often look like bad ideas. Networking with seasoned artists was unexpected, and it was humbling and eye-opening to gather advice cultivated from their first-hand experiences in industries I hoped to work in.

Most importantly, this conference taught me how to get over myself. Halelly Azulay’s speech on motivation and resilience skills is one I’ll never forget. Listening to her talk about creating new grooves and paths in your mind by changing your thinking patterns made me realize that we’re all just creatures of habit, and change is at the tips of our fingers. I’ve already been adopting a growth mindset instead of a fixed one. I find that it’s been aiding me in battling a long-time speech impediment and giving me the confidence to not become disheartened by anxiety and fear.

In today’s school system, we’re taught to be critics. We’re trained to put new information through many filters. This leads to our not trusting our gut instincts. But innovation comes from thinking for yourself, thinking selfishly. As much as I liked Ayn Rand’s philosophy at first, I found it hard to practice because I couldn’t see myself adopting it and still being a Good Samaritan. It was one based on selfishness, after all. But having an open forum to discuss her ideas showed me how this wasn’t a bad thing at all. As she puts it, “a creative man is motivated by the desire to achieve, not by the desire to beat others.” Scanning textbooks of topics I couldn’t care less about, not taking care of my health, putting all my ideas on the back burner for when I had free time, which as a student, seldom ever comes around—it made me realize how I was wasting the most important resource of all—myself.

I have never been in a setting where small talk has been so intellectually arousing. It wasn’t even heavy, as the people you conversed with were not pretentious in the slightest and were open-minded, wanting to gain new knowledge as much as they wanted to share their own ideas. I’m never going to forget that while devouring pizza, I was also talking about poetry, favorite journalists and analyzing sex scenes from The Fountainhead. It was amazing and incredibly inspiring to meet like-minded individuals from all over the world who were dedicated to growth.

My prejudices were torn down in front of my eyes. The conference introduced this whole new paradigm of answering traditional questions that college kids struggle with. What do you want to do . . . for you? ARI and STRIVE were constantly emphasizing the importance of coming to your own conclusions about the world around you. Nobody was trying to shove their beliefs down your throat, and open dialogue and asking challenging questions was strongly encouraged. One talk in particular made me realize that despite thinking I was a libertarian arts kid who was free-spirited and didn’t succumb to societal ways of thinking, I was actually subconsciously giving into conventional stereotypes about businessmen and business culture.

By the end of the conference, I realized that the fact that I was perpetually asking myself “Is this a cult?” was a defense mechanism I was using to hold onto my prejudices because they were comfortable. As an arts kid, the tables had turned. We hate it when the suits contemptuously judge our life decisions without knowing us. I had been doing that my whole life to the business sector, stereotyping CEOs and, therefore, dehumanizing them. This was made especially apparent when Keith Lockitch talked about why Rand regards industrialists as heroes but society vilifies them as “Robber Barons.” I was being nothing more than a sheep when I gave into the low public perception of business elites.

What’s my mission statement? What does success look like to me? These are questions I’ve been readdressing with a whole new paradigm since the first time I used those earlier paradigms, during college applications. This conference empowered me to increase my own personal value and helped me gain vision in my own creative and intellectual pursuits. I’ve been implanted with new-found confidence that anything is possible as long as I am self-reliant and put in hard work.