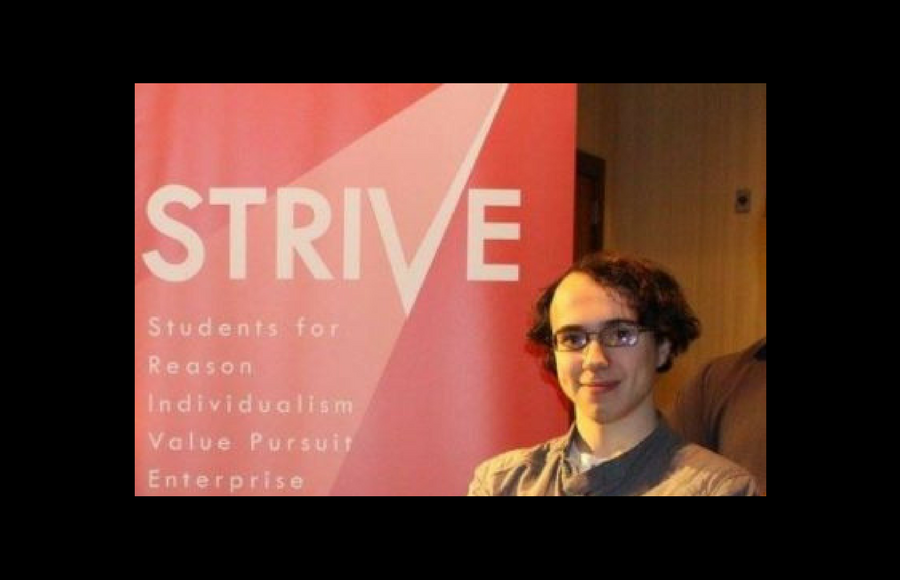 The following is a letter to the editor from Tyler Ashby, a student of psychology, YouTube podcast host of Objectivist Discussions, and moderator of the Objectivism Q&As at STRIVE.

Like many Americans, I was raised Christian. Growing up, God was the center of the universe, and so I sought to learn everything I could about him. Around the age of 13, I began studying the works of famous apologists who argued for the existence of God and the validity of his doctrine. As a consequence of my devotion, I became very fundamentalist, convinced that if the Bible were true, it should be the guide to my life.

However, the more I studied, the more I began to experience a deep sense of cognitive dissonance. I felt something was terribly wrong with the code of ethics that I was learning. I was being taught that one’s purpose in life is to serve others, but a value I held even more strongly was that I had a right to my own life and liberty. This contradiction led me to seriously reevaluate my convictions.

At age 16, I began dropping the arguments for God’s existence that I had studied one by one, as the criticisms I had encountered struck me as too compelling to ignore. Eventually, I saw flaws in the last argument I had and I dropped my belief in God rather abruptly. In doing so, however, I had taken a sudden step into personal chaos and uncertainty.

I started reading Ayn Rand, along with many other philosophers, around the time that I was leaving Christianity, in the process of becoming an atheist. I did this because I knew that I needed help. I knew very well what the consequences of killing God were, so to speak. It meant abandoning the basis for my entire view on morality and how I came to understand the world. After all, according to the Christian worldview, “the fear of the Lord is the beginning of all wisdom.”

I understood the necessity of having an explicit philosophy, or of having an integrated view of existence as Rand would put it. She argued that everyone has an implicit philosophy, a set of ideas and premises that directs how one thinks and draws conclusions about the world. Even if one isn’t self-aware enough to identify their most basic convictions, there are fundamental ideas and values one must either accept or reject in the process of living one’s daily life.

As a Christian, I believed my purpose was to serve God’s will and serve others as a consequence. I became confident in my convictions by praying to God and trusting the gut feeling that came from that. I judged the actions of others based on biblical scripture, pride and self-esteem were indistinguishable but nonetheless sinful, and moral guidance primarily meant what I ought not to do. Without a belief in God, however, the basis of all those convictions was lost. So, I turned to secular philosophers to find help in reshaping my view of life.

The New Atheists such as Sam Harris and Christopher Hitchens were incredible inspirations to me, but I found their cases for morality to be unsatisfying. They argued that benefiting human life should be the purpose of morality because it’s intuitive and useful, but I felt this argument was inadequate. Rand’s argument was a lot more persuasive to me because it detailed how moral values are necessitated by the requirements of man’s life, how pursuing one’s goals in life requires taking a particular, moral course of action, and how this gives rise to human life as the standard of value.

What attracted me to Rand’s philosophy was that it argued that reason can be a means to discover morality, and also that reason can be a means to knowledge, that one can be confident in their understanding of the world. Morality didn’t feel like a compromise of rationality, and as a consequence, my moral values were something that I could refine or reconsider, rather than merely dogmatically assert. I was also more confident in asserting myself in moral arguments about politics and other issues because I no longer had to argue from a religious faith I struggled to prove. I had secular reasons for my views, and those reasons applied to everyone, not just those within a religious sect.

Rand’s philosophy gave me a new focus in life: living the best life that I could for myself, without the guilt of knowing that I could never do enough to make others happy. I could strive for my own happiness, not by ignoring others in the process, but by befriending only the people that I care about, those that bring value to my life, not take it away. This was a life to be celebrated, not a vale of tears, with many achievements to be made and values to be created – and this life was mine to live on my own terms and for my values.

I came to see virtue as primarily a means of achieving positive values, not negating what’s evil in the world. Justice for example, to me, is not primarily about punishing criminals, but about promoting and building up the virtuous people around you. Honesty is not primarily about not lying, but about allying yourself with the facts of reality, and accepting that doing so is the only way we can succeed and thrive.

I’ve benefited the most from Rand by obtaining a better grasp of what I want from life and knowing how to achieve it. To conclude, I’d like to say that I’ve been greatly inspired by Rand’s profoundly positive outlook on life, and so I’ll share a quote from Atlas Shrugged that’s stuck with me since the day I read it:

“Do not let your fire go out, spark by irreplaceable spark, in the hopeless swamps of the approximate, the not-quite, the not-yet, the not-at-all. Do not let the hero in your soul perish in lonely frustration for the life you deserved, but have never been able to reach. Check your road and the nature of your battle. The world you desired can be won, it exists, it is real, it is possible, it’s yours.”