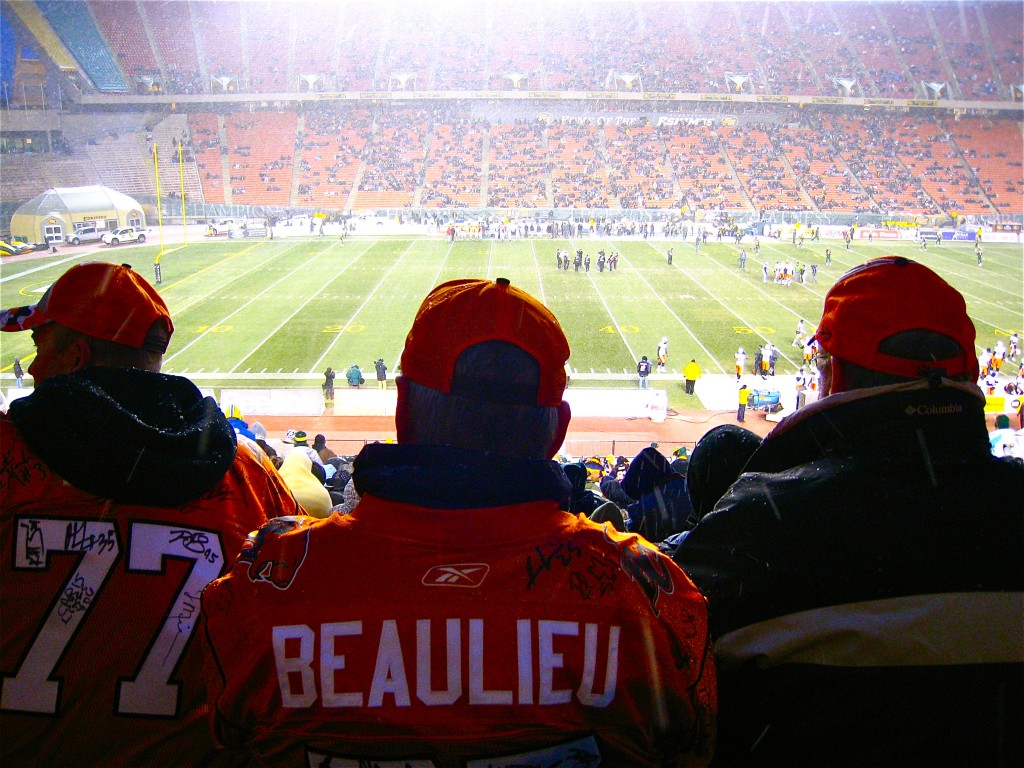 One of this year’s biggest stories was the trial and conviction of Penn State’s defensive coordinator Jerry Sandusky, on charges of sexual abuse. In November 2011 when Sandusky was arrested and coach Joe Paterno was dismissed, students in State College, PA rioted, flipping over a media van and damaging several light poles. Even after police reached the scene donning riot gear and pepper spray, many students refused to comply with authorities.

Outside of Pennsylvania, these reckless displays by sports fans are not altogether uncommon. When the Canucks lost the Stanley Cup to the Bruins in 2011, thousands trashed Vancouver, destroying property and harming dozens. After the Red Sox beat the Yankees, Bostonians rioted outside Fenway and a girl was killed. 2010: The LA Lakers won the championship and their fans burned cars. And in 1969, Honduras and El Salvador waged war in part due to a series of violent soccer matches.

As we look forward to the summer Olympics which we hope will offer a better example, we can’t help recall that too many sports fans have this dark side. Many fans may condemn these violent acts and thankfully will never partake in such behavior. But it’s worth reflecting on how fanatics approach the subject of sports and whether many fans share the same basic attitude, if only to a lesser degree.

Have you ever said or heard someone say the following?: “If Tiger Woods is crowned champion, it’ll be a good weekend” (as if his successes are yours). Or: “If the Lakers lose this one game, I’ll be angry all week” (as if their failures are yours). Or: “I hate Yankees’ fans!” (as if the Yankees beat your home team too often). Or: “It isn’t just a game.”

For many sports fans, it isn’t just a game. What unites these statements is how the sports fanatic makes others’ sporting achievements part of his or her own identity. Playoff defeats warp into weeklong bouts of moping and depression. The players’ passions and prejudices become the viewer’s own and on-field rivalries manifest into rage statuses on Facebook, or worse: fights in parking lots, burning dumpsters, and riots.

But the sports victories of others cannot be a substitute identity. No matter how many homeruns your home team hits, it won’t fill your bank account one penny. Even if you catch every Nascar lap in glossy Hi-Def, your GPA isn’t going to rise. Your romantic relationships can’t improve via expanding your studies on Tom Brady’s spiral.

Still, recognizing what sports cannot do for a person’s life helps to illuminate what they can do.

Imagine that it’s Friday night. You’re with your buddies at your favorite sports bar, eyes glued to the closest plasma TV. On screen, your hero, the one whose name you don on the back of your jersey, steps up to the three-point line. The whole season is at stake. It’s either: sink this or go home. Bounce. Bounce. Bounce. From your bar stool, the dramatic moment seems to last an hour. Your fists clench, heart racing, breath bated. He extends his arms and releases the ball, a globe of hope that flies over the defender towards glory. You whisper an encouragement under your breath, the bar’s ambient noise melting away as fast as last year’s playoff run . . . Swish. The room erupts in a torrent of victory cheers and high fives, as a wave of happiness fills your chest.

The above scenario communicates the inspirational power of sports. In a way not unlike how many love Shakespeare’s prose or Scorsese’s reels or Beyonce’s voice, athletes can also inspire millions of individuals around the world. This sense of encouragement is a consequence of experiencing an athlete’s physical prowess. Their superb talent on the field, like a scored free throw, is a nugget of inspiration to the sports viewers because they are achieving success and happiness. It says to the audience that victory is possible in this small world of competition, and by extension in your world—in the classroom, at the office, on that physics test. There’s a reason why businesses love using sports analogies in the work place to encourage employees to reach their goals.

Happiness and achievement are what sports are all about, but not in the vicarious way that some people think. Sports ought to be valued because of its capacity to encourage greatness. A healthy approach to the Game-of-the-Week is: How does this display of goal-directed behavior translate to my own life? By appreciating Tim Tebow’s spiral, by experiencing Rafael Nadal’s forehand winners, by witnessing Alex Morgan’s endurance and speed, we can all be encouraged to battle through finals weeks. By observing incredible feats of ability and happiness that was fought for and achieved on the field, viewers can be instilled with fortitude and a sense of self-efficacy, confident that happiness and victory are possible to them.

The degree to which individuals orient their identity around a sports franchise varies greatly from the Penn State rioters to the less-confused its-not-just-a-game fans. The answer to both groups should be: It is just a game. Those athletes’ own trophies can’t fill your shelves. But games do mean something. Reflect on these athletes’ achievements and then be your own biggest fan—win in your own life. Don’t undercut the value of the very sports you love by making a mess of your life. Be inspired to win that promotion, not to burn dumpsters.

Minimum Wage Jobs are Opportunities to be Thankful For