This piece originally appeared in our Fall 2016 Magazine. In it, Celeste Hook, a freshman at Okanagan College in British Columbia compares the teaching methods of her Grade 7 Lit Class with that of her class in Grade 12, and how one helped her see fiction as inspirational and instructive, while the other left her confused and empty.

IT WAS IN GRADE 7, but I still remember my excitement like it was yesterday. I was reading the scene in Ayn Rand’s Atlas Shrugged in which one of the main characters, Dagny Taggart, stands in the engine room of her company’s locomotive on the debut run of a newly-completed railway, the John Galt Line. Dagny feels a pure and joyful exaltation as her creation races across the continent, understanding that the train’s motors are “a moral code cast in steel.” I might have been holding my breath too, so close was I to understanding how Dagny’s joy was tied to the engine’s power, but by the end of the chapter I couldn’t quite put it into words.

Later in class (in my family’s living room, since I was homeschooled) I discussed the scene and the events leading up to it: Dagny’s enormous struggle to build the railway, the seemingly-insurmountable opposition she faced, and her ultimate triumph on its opening day. We discussed it for a while, returning to key passages in the text for clarification and careful analysis. Soon, with my teacher’s help, Dagny’s thoughts and emotions of the scene began to make more and more sense to me. The principle I couldn’t quite put into words was taking shape before me. I saw that the various parts of the motors were united by a single purpose—to convert energy into motion—which ultimately culminated in the train’s motive power. Likewise, Dagny’s actions up to that point had been consistently driven by her determination to build the railway, which finally culminated in the intense joy she felt upon her project’s completion. I realized that Dagny’s happiness had to be earned through achieving—not passively receiving, or worse, renouncing—her values; that happiness cannot be without cause, for it is the reward of purposeful, value-directed action. Even more, I realized that Dagny’s business-success was a profoundly moral accomplishment: the moral code metaphorically “cast in steel” was one that holds a person’s life as the standard of value, and the achievement of his or her values as the purpose of life.

Learning literature in homeschool was an experience full of such realizations. I discovered themes and principles in works of fiction that could be applied to choices I was faced with in my own life. I expanded my awareness and appreciation of the world by viewing it through other, perhaps more perceptive, eyes. I even gained a deeper understanding of what makes a character heroic, or contemptible, or somewhere-in-between, and used these literary experiences to reflect on and improve my own character. Literature class for me growing up, like every other subject in its own way, was about learning how to live. But when I stepped into my first public-school classroom in Grade 12, I soon found to my surprise that this objective was tragically absent.

Studying Shakespeare’s Hamlet in high-school was an indiscernible mixture of hunting for symbols, metaphors, character-foils, and sundry other literary devices, while systematically failing to identify the ideas and principles they conveyed. Although the study of literary devices can greatly enhance one’s grasp of the themes and life-lessons contained in literature, their value is easily lost when they are treated as ends in themselves. The result left me feeling confused and even empty. We examined, for example, the symbolism of poison throughout the play. This amounted to scouring the text for mentions of or allusions to poison and relating these instances nebulously to the theme of ‘corruption.’ Then we were tasked with memorizing all of them for an exam. But why is the symbolism of poison important? I remember asking. Isn’t it part of discovering what Shakespeare is saying about the world at large, and perhaps even our own lives? No answer. And there wasn’t an incentive to find one, because the question on the exam was simply: Identify five instances where poison is alluded to in Hamlet.

My classmates and I were told that Laertes, a young nobleman who seeks to avenge the murder of his father, is one among many character-foils for Hamlet. But the inquiry really ended there. Why is understanding the similarities and differences between Laertes and Hamlet important, though? Isn’t it because the contrast between them can help to illuminate what Hamlet shows us about human nature, honor and revenge? Again: no answer. And it didn’t seem to matter, because the question on the exam was merely: Name at least three character-foils for Hamlet.

In the end, if Hamlet is a story rich with insights about human nature and morality, these were of no importance to that class. What was important was rote memorization of the story’s concrete particulars; list them on the exam and move on. Ultimately, that class was an embodiment of the two attributes that Dagny Taggart, standing in her train’s engine-room during the debut run of the John Galt Line, recognized as being “radiantly absent” from the train’s motors: the causeless and the purposeless.

I think that education has a unique objective: to develop our minds so we can identify, pursue, and achieve our values. Literature, by recreating reality according to the author’s view of existence, can show us an inspiring image of certain values which we may in turn seek in our own lives, upon reflection. Indeed, with the right training we can discover, in great works of art, principles to guide us and heroes to inspire us. But when learning is divorced from living—when there is no answer to the questions “Why?” and “What For?” —the result is a mind that functions without cause or purpose. Like a motor which, if properly directed, could power a speeding train across a continent, but instead exhausts itself in a basement, so a human mind has the potential to create values and achieve happiness—or simply rust out. I believe that education can and should empower us for the former, and therein lies its crucial, practical value. [TU] 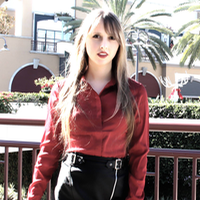 When she’s not studying literature and philosophy, Celeste employs her skills as a studio musician to compose and produce her own songs. She is currently a first-year student of philosophy at Okanagan College in Kelowna, British Columbia.

A Student's Right to Listen, Challenge, and Learn